Since the beginning of this year, the photovoltaic industry has set off a new round of expansion [competition], and listed companies in the A -share photovoltaic field have announced the production capacity expansion plan with a total investment of over 25 billion yuan.

From the first batch of photovoltaic leader Wuxi Shangde, Jiangxi Saiwei bankruptcy, to Hanergy Group's depression, to the rise of new leaders such as Longji Green Energy and Tongwei Co., Ltd., the domestic photovoltaic industry has performed production capacity many times Expansion boom. The new round of expansion [competition] has caused the industry to worry about the oversupply of the photovoltaic industry. When the [scale effect] encounter [post -development advantage], those who enter the game first can only further expand the market share of advanced production capacity, expand production [competition] or exacerbate excess structural capacity.

[Only by maintaining the market share can we get excess profits. ] When explaining the reasons for the expansion of the company, Liu Li (a pseudonym) of the head of a head photovoltaic enterprise told the China Securities News reporter, [We have to live and live well. In addition, if it does not expand production, it will not get more financing, which will also affect the company's market value. ]

A reporter from the China Securities Journal found that since this year, the photovoltaic industry has set off a new round of expansion of production [competition]. In addition to the horse race of photovoltaic companies, cross -border new troops have also poured in. More than 20 A -share photovoltaic listed companies including Longji Green Energy, Tongwei, Jingke Energy have announced the production capacity expansion plan, with a total investment exceeding 250 billion yuan, involving silicon materials, silicon wafers, battery films and components.

Industry insiders believe that [dual carbon] the track market has huge potential, but the investment in photovoltaic projects is large, and the technical iteration is fast. When the scale effect encounters the post -development advantage, it will force the person to enter the bureau to further expand the advanced production capacity. The enterprise will face a large amount of capital pressure, expand the production of [competition] or exacerbate excess structural capacity.

On June 4th, in the Jiangsu Zhongneng Factory area under GCL Technology, the tower was lined up, and the machine roared. Although the Dragon Boat Festival holiday is superimposed with high temperature weather, the factory is still running at full load. At 9 am, a 13.5 -meter -long high -column truck slowly sailed out of the fourth phase of the finished product library square in Jiangsu Zhongneng. The busy on -site staff told the China Securities Journal reporter: [On the car just driven out, there are a lot of FBR granules. If everything goes well, it can be shipped to the downstream manufacturers on the same day. ]

A reporter from China Securities News saw at the scene that there were such high -column trucks entering and leaving the warehouse from time to time. [Under normal circumstances, nearly 90 tons of FBR granules are transported from here every day. ] The staff responsible for the loading of the warehouse said that it is normal for holidays to not rest, especially downstream demand, and the company has always been on the job. 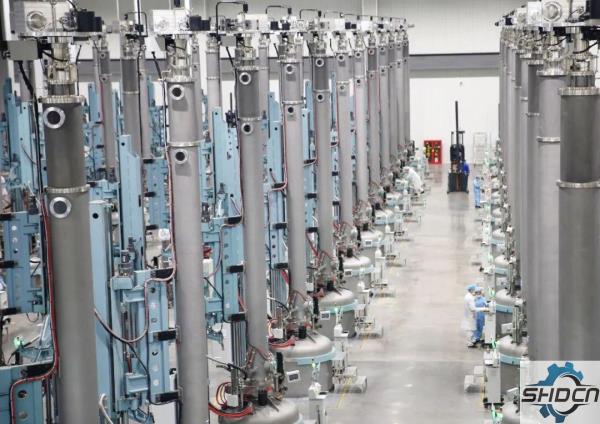 Due to the strong market demand, the price of photovoltaic upstream silicon materials has risen sharply this year, and photovoltaic companies have set off a new one. Rotation expansion.

Jiang Hua, assistant secretary of the China Photovoltaic Industry Association, believes that photovoltaic enterprises Liebherr Tower Crane has expanded, mainly seeing the huge potential of the market. From the perspective of the domestic market, [14th Five -Year Plan] During the period, the average number of new light installations will reach more than 90GW, maintaining a high -speed growth trend. Recently, the photovoltaic industry has ushered in a favorable policy. The General Office of the State Council forwarded the National Development and Reform Commission and the National Energy Administration's "Implementation Plan on Promoting the High -quality Development of New Energy in the New Era". Accelerate the construction of a clean and low -carbon, safe and efficient energy system.

During the expansion of the production, photovoltaic head companies choose to open up the industrial chain with vertical integration layout, involving silicon materials, silicon wafers, battery films, components and other fields. Taking Longji Green Energy as an example, the company announced a 19.5 billion yuan investment plan on March 13. Among them, the annual output of 30GW high -efficiency single -crystal battery project is a highlight, which is also regarded as the company's start to make up for its own shortcomings.

The relevant person in charge of GCL Technology told the China Securities Journal reporter that the phenomenon of imbalance in the production capacity of the photovoltaic industry chain has long -term existence. Development, so the profit distribution will fluctuate greatly. This is also the reason why integrated enterprises are increasing.

Since 2021, the price of silicon materials has risen fiercely, and the photovoltaic industry [silicon is king]. The middle and lower reaches of the industrial chain have extended to the upstream polycrystal silicon material links, seeking vertical integration layout. [Mainly based on supply chain security considerations. Many companies could not get silicon last year, and the operating rate was only 50%-60%. Since the beginning of this year, the upstream and lower reaches of the industrial chain such as Tower Cranes shares, Runyang and other industrial chains such as Tower Cranes are on the middle and downstream companies. ] Jiang Hua said. 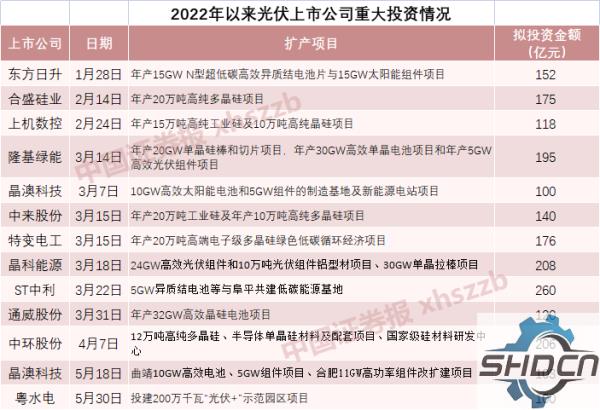 Why does photovoltaic enterprises be expanded [Huashan Road]?

Strengthening scale effects and reducing production costs is an important reason for the expansion of enterprises. In April this year, Tongwei announced the 12 billion yuan expansion plan, which plans to invest in the annual output of 32GW high -efficiency crystal silicon battery project. The company said that it will further expand the company's scale advantage of the efficient crystal silicon battery industry.

[If the cost does not expand production, it will not come down, and the degree of profits will affect the capital direction. For example, when the component capacity is large enough, the auxiliary materials linkThe production will be expanded accordingly. As the production capacity expands, the price of the product will decline, which will make the profit space. ] Liu Li told the China Securities News reporter.

According to Debon Securities Research Report, since 2022, photovoltaic integrated manufacturers have replenished and seized new technologies opportunities due to weak production capacity, and they The technical routes are integrated with heavy capital, N -type TOPCON, HJT and other high -efficiency battery films to expand production. Since the beginning of this year, companies such as Jing'ao Technology, Jingke Energy, Zhonglai Co., Ltd., Dongfang Risheng and other companies have announced the expansion of 5GW-10GW. The technical routes basically belong to the TOPCON or HJT field in N-type TOPCON or HJT. [The technological progress of the photovoltaic industry has made very fast, you must not only see the expansion of production capacity, but also the backward production capacity of elimination. In 2021, the 166mm sizes of silicon wafers accounted for more than 40%, and the market proportion in 2023 may drop sharply to 10%. Many old production lines will be eliminated in the next two years, and advanced production capacity will not be excessive. ] Jiang Hua said.

Industry insiders said that the new capacity has the two advantages of technical and cost. When the scale effect encounters the post -development advantage, those who enter the game can only further expand the market share of advanced production capacity. The [strange circle] made photovoltaic companies compete for expansion and production [competition].

In this expansion of [Competition], photovoltaic heads are confident in continuously seizing market share through expansion. Yan Hu, deputy chairman of Tongwei Co., Ltd. said: [Future photovoltaic companies are no longer a simple technology or capacity competition, but more in terms of systematic ability. Market elimination. ] Relevant person in charge of Longji Green Energy told the China Securities Journal reporter that the company has been building a market competitiveness under the [excess status] for so many years. Whether the operation is stable.

[In the future, when the industry fluctuates, the company's ability to control risks is the key. The growth potential of the track is certain. It is uncertain which companies can continue to stand in the head position and whether they will have a "three or five years of each leader". ] Liu Li said.

The production capacity expansion cycle superimposed technology iterative iteration, and companies that lack technical judgment ability will be eliminated. Li Zhenguo, president of Longji Green Energy, revealed that the investment in the production line of photovoltaic batteries is very large. If the technical route is wrong, the company may lose its competitiveness.

Expansion of the photovoltaic industry chain [competition], causing the industry to worry about the oversupply of the industry's stage production capacity.

In March of this year, the Silicon Industry Branch of the China Nonferrous Metal Industry Association is rareThe ground warned that once the silicon material was too required, it was very easy to occur for the extreme situation of inverted costs in the cost of long -term costs, and then entered the vicious circle of insufficient investment in the industry and the serious mismatch of the supply and demand, which exacerbated the market's disorderly competition.

In fact, the photovoltaic industry has been undulating. Institutional data shows that in 2011, optical capacity exceeded 60GW, and the global terminal market demand was only 30GW at that time. A large number of overcapacity was affordable, the price of the product plummeted, and many companies in supply chain were helplessly closed. The entire industry has undergone a profitless development of more than two years, and the capital expenditure budget has been compressed to minimum level maintenance of factory equipment. In 2013, the market began to recover, and the industry was reshuffled. Solarbuzz data shows that the expenditure of photovoltaic equipment in 2013 was only $ 1.73 billion, and this data was $ 13 billion in 2011.

Lu Chaobe, deputy director of the expert committee of the Silicon Branch of the China Nonferrous Metals Association, estimates that in 2023, the polycrystalline silicon production capacity will exceed 2 million tons, and the supply of more than 1.5 million tons of imports can be processed into nearly 600GW scale. Photovoltaic components, global market installation demand is around 300GW. The increase in capacity of expanded capacity is significantly greater than the demand increase. In 2023, the silicon material link will have overcapacity, and the price will decrease significantly.

The photovoltaic glass, as auxiliary materials, has been prompted by multiple institutions to indicate the risk of excess capacity.

However, there is no shortage of optimistic views. Jiang Hua believes that the excess capacity depends on the increase in the future photovoltaic market. The expansion plan of 10 billion yuan is actually implemented in installments. Enterprises will decide how to advance the subsequent production expansion plan based on future market conditions. In addition, we must also consider the concept of health capacity utilization. The capacity utilization rate of each link is between 60%-70%. Moderate production capacity is greater than the actual market demand is conducive to industry competition. Do not worry too much about future production capacity.

In Yanhu's view, the excess capacity of the photovoltaic industry is a concept of [structural], with overcapacity, and greater demand for high -quality production capacity. Therefore, in the future, there may be overcapacity in the industry, and some companies will continue to expand. Jingke Energy believes that the global photovoltaic market is highly prosperous, and the application of advanced production capacity and more efficient advanced products to apply the next generation of technology will usher in the situation of continuous supply.

Liu Hanyuan, chairman of the board of directors of Tongwei Group, who has been floating in the industry: [Several rounds of cycles in the photovoltaic industry is like a roller coaster.Well, I want to do the entire industry chain and encounter major setbacks in the process of extending the industrial chain.Helplessly, companies often forget the pain when scars are better.] 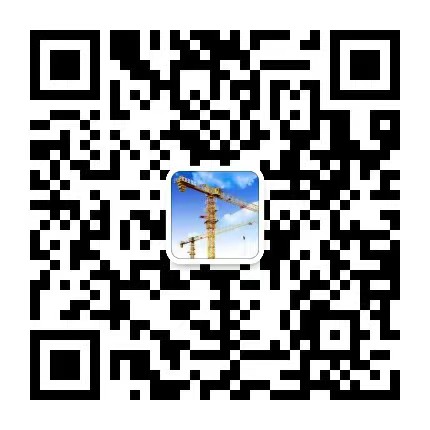